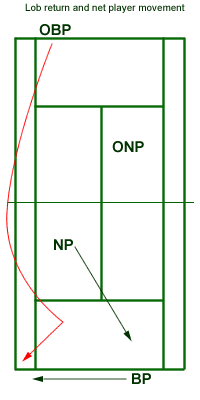 The net player (NP) must switch sides and back up (anticipating an eventual overhead from the opposing team);
The baseline player (BP) has to also switch sides to return the lob.
Both players from the defending team will be on the run to play the next ball, which makes it difficult to continue the point.

Important:
For a lob to be considered an aggressive shot, it should have lots of topspin (to begin with) and be placed deep, well beyond the service line.