Into the Final for the First Time

When my older daughter turned 10, I knew it was going to be tough to split between the green and orange level tournaments – my younger one was still determined to win an orange tournament before joining her sister in the full court / green level competitions.

During the indoor season, we unsuccessfully tried to participate in several tournaments – the distance impeded the fact that my two daughters had to play on different days due to their separate levels.

When Spring came and the outdoor season kicked in, we finally managed to book our spot in a tournament that would host both levels (green and orange) on the same day and just a few hours apart. Which meant less wait between matches and less travel for all.

My older daughter, Cezara, was first to play beginning at 12:30 pm. Even though a day before she caught a bad cold she decided to take part in her first green level competition anyway.
I could see in her movement and body language that Cezara was far from being fit enough to concentrate and compete… Nonetheless, she played all her 6 matches (round-robin, first to 7 point tie-break) winning two and losing four. A good performance considering the health issues she had to deal with and her first time competing on a full-court and against tougher opponents.

At 3 pm, the time came for orange-level matches. My younger daughter, Bianca (8 years and a half), blended among the players during the warm-up. She was the last in line and visibly the shyest one.
Nothing could tell that she would end up within a couple of hours getting everybody’s attention and admiration…

They were divided into two groups of 6 players who were going to play in a round-robin format (every player against each other in a game to a 7-point tie-break). The top 4 players from each group would go on to the quarter-finals: first player vs. the fourth from the opposite group, second vs. third player, and so forth.

Bianca had won 4 out of her 5 group matches and went on to be the top player in her group.

Before the quarter-final began, I went to the fence and told her that she would be playing elimination matches from now on meaning she should erase from her memory whatever happened before and focus only on how to win the next matches. I suggested to Bianca to not be satisfied with the past performance (a big mental trap) and keep her mind busy in the “now-and-next” mode.

(Some of the pieces of advice I gave my daughters before the tournament were the following:
– during the warm-up, they should keep their feet moving to get the blood flowing and resist hitting the ball hard;
– make mental notes of their opponents’ possible weak shots – e.g. backhand, serve spin, etc.
– use more slice serves because some kids are not familiar with handling spin serves;
– mentally they should keep their focus by always knowing the score and visualizing winning the next point.)

To my satisfaction, I saw that Bianca followed most of the advice I gave her in regard to the warm-up and strategies. 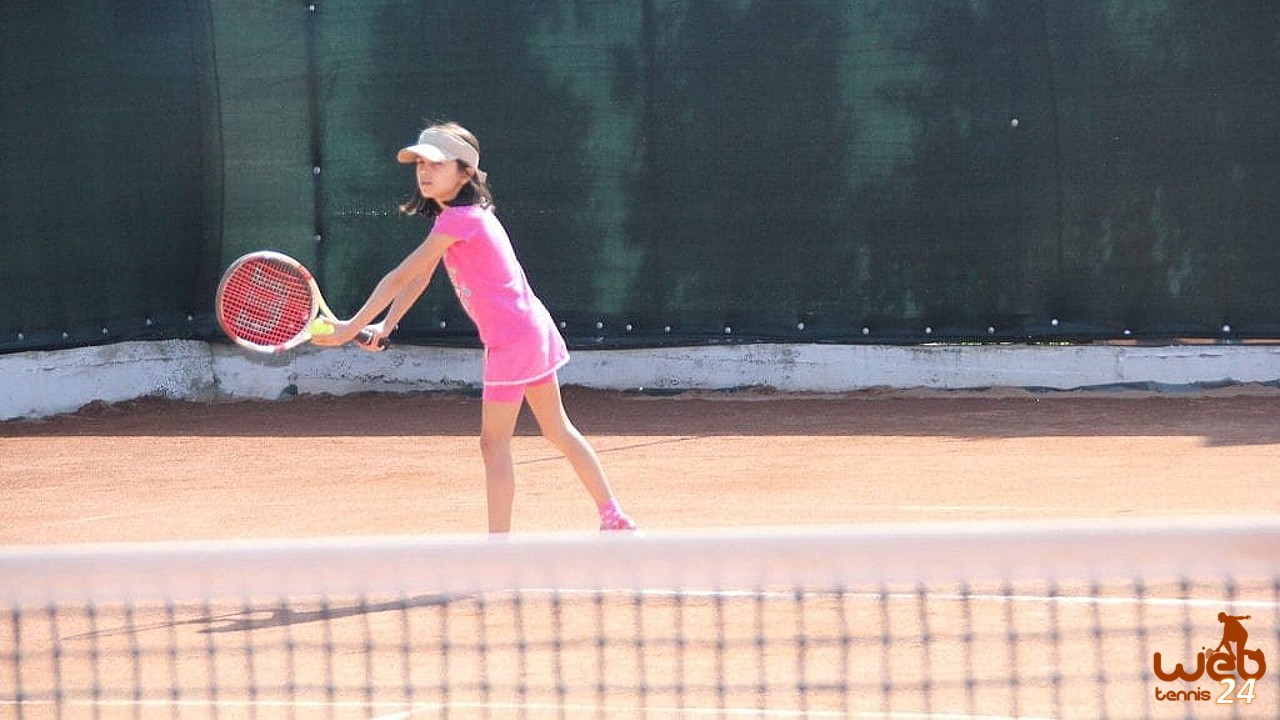 She won the quarter-final in a heavily contested line calls and long rallies match. The umpire made some mistakes on both sides. Eventually, Bianca prevailed 7-3.

Again, I went to the fence (while she was resting and waiting for the next match) to help her stay focused on the present and what was coming ahead. She told me that this is how far she had gotten in previous tournaments – 4th place was the highest achievement.
After giving her a few tips on staying loose and focused, I left her on the bench, alone.

To our surprise, her semi-final match was going to be against, what we considered, the best player in the tournament. This girl, who traveled from out of the country to participate in this tournament, had a beautiful technique (great backhand, nice slice serve) and looked very confident.
We still don’t know how this happened, but Bianca marched to victory and sent her opponent to play for the 3rd and 4th places…
All I could say is that Bianca kept her focus from the beginning to the end, played steady shots, and ran for every single ball. That, in the end, paid off.

Our delight was immense: not only for her victory against one of the best players she’d ever played but also for the fact that for the first time she’d be in the final and so close to winning a tournament.

The final match put her against a player who lacked the technical elements but who was very persistent and smart in hitting a lot of balls in.
After a good start when Bianca was leading 3-0, she found herself contemplating the win and very certain of a first place in the tournament. This is the mental trap that is hard to get out of the head afterward…

Bianca found herself slowly beaten and denied the first place.

Even so, by playing with confidence, focus, and persistence my daughter made us all proud to see her getting a medal and recognition for her achievement.

We, after all, celebrated with a pizza and some of our close relatives waiting for us at home to congratulate both sisters. 🙂

Conclusion:
Even though every tournament that we go to means a lot of pressure for both parents and kids, in the end, the fact that we dare to get out of our comfort zone is what matters.
Experiences, bad or good, are what make life worth living and sharing.
It is not the winning or losing in tournaments that matters; it is the fact that we meet new people, get good exercise, and make a difference in the world by giving a good example of hard work and respect for others.