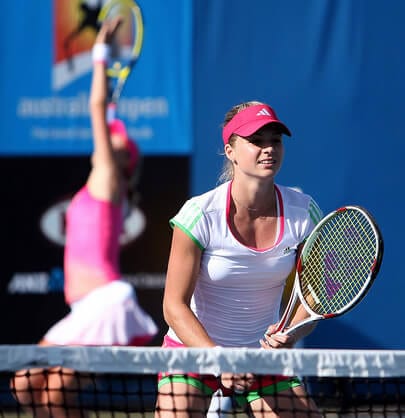 As I woke up this morning, I turned on the TV to watch the Australian Open matches. There was a doubles match going on that was nearing the end.
The serving team was up a break and trying to close the match leading 5-4 in the final set. This team lost the game and… the match!

This net player, whom I blame for losing the match, is actually in the top 20 in singles and top 50 in doubles rankings. But, to my surprise, he was making a mistake that I would attribute to the less experienced players:

As his partner was serving and engaging in cross-court rallies, this particular net player kept following the ball by looking back (to his partner hitting the ball) and forth (to his baseline opponent) instead of keeping his eyes fixed only on his opponents, especially the opposing net player. This is a basic mistake that I was surprised to see a pro player making.

As a result, while his partner was serving to close the match, they lost the game and eventually the set and match because most of the points were lost by this net player who was too late in making his volleys. (At the end, I could see his partner throwing his racquet against the chair in frustration – I could only assume why he was so angry.)

To summarize this short article… when you are at the net, avoid looking back when your baseline partner has the ball – there is nothing you can do in this case. Instead, your eyes should be fixed on your opponents and in particular on the closest one who is at the net.
As your partner will hit the ball back in play, the closest opponent (at the net) is the most “dangerous” one because if they poach, the ball will come to you and you’ll have less time to react.