My Daughter Taught Me a Lesson (Again!)

Usually, Sundays are when we (my two daughters and me) play practice matches. No more drills or technique instructions… just games and fun.

So I told my two daughters (Cezara and Bianca) that I would require them to play against their mother in a game to 10 point tie-break and the winner will play against me for the “final” (playing against mother would be the semi-final :)).

Bianca (my little one, who is 8 and a half) beat her mother easily. She played aggressively and gave my wife no chance.

But it came down to my older daughter, Cezara (who is now 10 years old)… she is very competitive but the nerves and her desire to over-achieve can be her greatest enemies.

Seeing that her younger sister beat her mother easily, she wanted to prove she can do it too. But those thoughts tighten her up and nerves took over.
Therefore, she played slowly (I’d say less than 50% of her power capabilities) and made most of the mistakes.

I could not believe when my wife beat her 10-2… easily. Most of the points were actually lost by Cezara.

When they shook hands at the end of the game, I went to her and this was first thing I said: “Cezara, you played too slowly!”
She looked at me like I just hit her with a stick.
I could see that that was the last thing she needed to hear: a negative comment when she was already feeling miserable about her loss…

Even though I knew I should not had said it, considering it was a friendly family match, I thought that a realistic feed-back would help Cezara know why she lost.

But her reaction made me understand, again, that the last thing a player (student) needs to hear when they are upset is a negative comment.

It re-enforced my knowledge in the following regard:

– we should never say negative comments when teaching tennis or any kind of lessons to our children;

– feedback should be given only if asked or permission is granted (especially if it is about a negative action).

As a person who grew up being criticised a lot, I find it hard to keep things always positive. But I know that it can be learned with practice.

We just have to remind ourselves that positive words make a much better difference in someone’s performance and bring us closer to those who need them.
After all, we want our children to feel understood and loved. That can be done with words of love and honest attitude.

What should I had said to my daughter after she lost a match that she should had easily won?
Maybe nothing… just a hug to show her that she is loved. And a smile.

Should she had asked me why she lost… I could have told her. But usually players do not want to talk about losses. If they do, we should postpone the discussion until they cool off and some time has passed (maybe the next day).

Be careful when teaching children… What we say and how we react in front of them is always a lesson that can shape our relationships with them. Even their future… 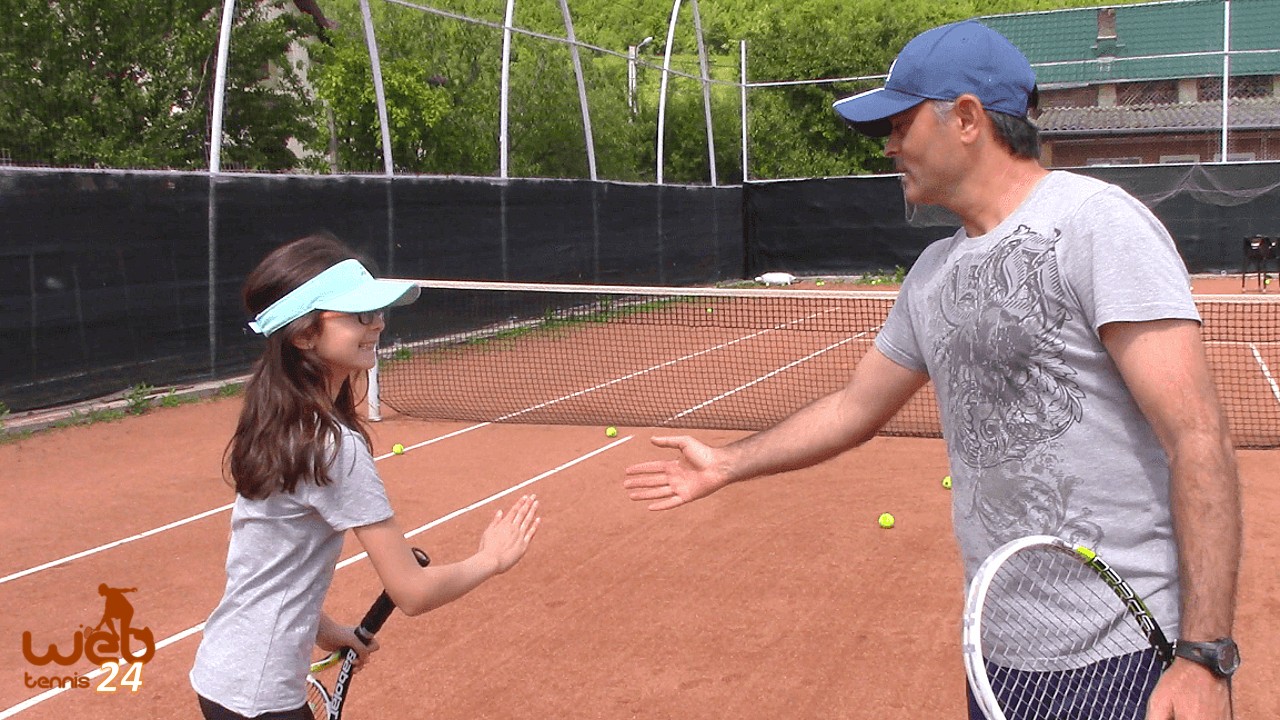 I’d like to address one of the things that have happened to me (I’d say, often) and I am sure you could relate to this as well…

You watch a tennis match between two players and think that they are playing great: long rallies, a nice variety of shots, etc. You can’t help but get the feeling that those guys are so much better than you. Then one day you meet one of them in a tournament match… And you beat them! That makes you wonder: “What has happened? I was certain that this guy was much better than me based on how they looked playing against somebody else.”

One thing is for sure: only because somebody plays very well against a certain opponent does not mean they will play well against you too!
We are all different and our style of play can either help or impede our opponents.

We often tend to underestimate our own potential and therefore we think others are better players when, in fact, they are not.

Now, THAT is one attitude you should step on the court with.