Below I’ve highlighted a few points that will not only give you more spin, but also a better understanding of what it takes to make your serve consistent and harder to return.

The more rotation your outgoing ball has, the more air pressure is created on top of it that pushes it down. This allows you to swing harder and higher, knowing that the ball will come into the court due to the spin effect. 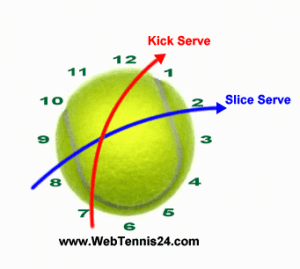 – I’ve always pictured the ball as the face of a clock (see graphic). In this case, to impart the slice on your serve, you should swing at the back of the ball from just above 8 o’clock towards under 2 o’clock. That will send your ball spinning more sideways and as a result, it will stay low right after the bounce.

– To be able to brush for slice, you should toss the ball slightly more towards your dominant side (right if you are right-handed). This should allow you to swing up and away from yourself.

– For brushing the back of the ball in a low to high trajectory, the server must toss it just over the head and slightly above the non-dominant shoulder.

The toss for the kick serve is higher than the one of a slice serve. It gives the player more time to bend the knees and push up into the ball, which is hit on the downfall.