The Volley is my favourite tennis stroke to teach, and that’s because I follow a progression that is both educational and fun for my students to learn.

It all begins by presenting the Volley as a “catch” and imagining that the racquet is an extension of the player’s hand.

Here are the steps that I follow (see the video below for visual demonstration):

1. I toss a few balls towards my student’s dominant side and ask them to catch. While they do that, I emphasize the fact that they do not take the hand back before catching the ball, nor do they follow through after catching it. So the volley should not have a backswing or a follow-through.
It is a catch and a push. The pushing should come from stepping forward towards the ball or getting the bodyweight into it.

2. After getting comfortable catching the ball (by the way, to take some pressure away you can use soft balls such as kids’ balls for the student to not be afraid of being hit in the face), proceed to catching the ball using the racquet.
Help the player imagine that the racquet is a bigger hand and that they should attempt to once again catch the balls, this time on the strings. Tell them that they should not be swinging, just tapping the ball so that it goes over the net (by the way, the player should be no more than 6 feet away from the net, at this stage; later on, we’ll show them where to position and how to cover the court).

3. Continue the same drill while the player slides, gradually, the hand lower towards the bottom of the grip. All this time, the student is taught to hold the racquet with a “hammer” grip (like they would be hammering a nail with the edge of it).

4. Once the player feels more comfortable catching and tapping the ball with the strings holding the racquet with a hammer grip, the next step would be to learn the basic footwork. Explain to them that power, when volleying, comes from catching the ball out in front and moving the bodyweight into it.
For that, as they prepare to catch the ball on the strings, they have to take a step in the direction of the ball.
(Note: Keep in mind that we are at the beginning stages of learning the volley, therefore the footwork that the player learns is a basic one, keeping it simple and not overwhelming them with too much information. Later on, we’ll add the more complex movement that requires covering the court and getting to the ball in balance).

Some of the technical aspects, that a coach should pay attention to:

For a visual presentation of this lesson, see the video below.

To learn how to teach tennis to children or any beginning player, visit the Kids section or 10 Lesson Plans for Teaching Beginning Tennis Players from WebTennis24. 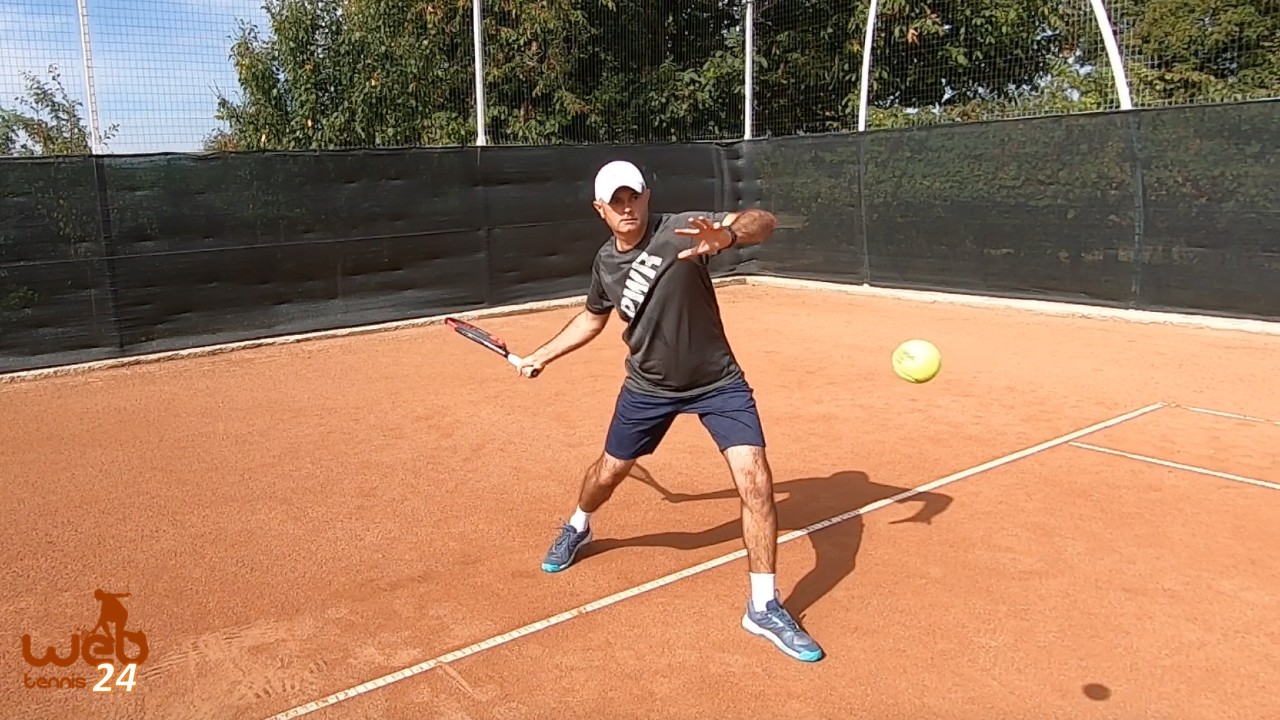 Tennis is a fun sport and great for meeting people.

In the beginning, players discover the game, then fall in love with the idea of hitting the ball over the net, exercising, winning points, and competing.

But after a while, we all want to take it to the next level: better technique, more consistency, more power, win matches and tournaments…

I have this friend who, after playing tennis for 3 years, has made a lot of progress. He can rally with an advanced player but when it comes to playing actual matches, you can obviously see his struggles.
So what does it take for my friend and any player, whose level has been stalling, to move up in ranking?
Below, I’ll highlight a few differences between the average and top players:

1. Top players create opportunities.
While average players wait for things to happen, the top players are proactive in controlling the point and looking for opportunities to win. They have a good knowledge of tactics and strategies that they can implement according to their opponent’s style of play.

2. Top players are mentally tough.
Average players let everyone know when they miss a shot: they get angry and loud as if the “gods of tennis” are against them.
Top players stay calm and in control of their behavior on the court; they understand that showing negative emotions fuels their opponent’s confidence, so they avoid that.

3. Top players are aware of their strengths and weaknesses.
One of the aspects that I’ve constantly seen from average players is their lack of patience to develop their game from the ground up. They want to compete but do not take the time to develop a solid foundation.
Top players constantly assess their strengths and weaknesses and build their game around that. They understand that any technical flaw must be corrected…and they do it.
Average players tend to ignore their weaknesses and rely on one or two strokes they feel comfortable with.

4. Top players practice to improve.
Most of the average players just want to play matches. Their satisfaction lies in winning matches even if that means competing against less gifted players.
Top players want to practice their tactics, consistency, and strategic placement more than they want to play actual matches. You can see top players spending a lot of time working on one single shot until they get it right.

5. Top players prepare for their matches.
Proper food before, during, and after a match is one of the aspects top players are aware of in order to perform at their best. They pay attention to a proper warm-up before the match, stretching, and recovery exercises after it.

6. Top players respect their opponents.
Once a player reaches a certain level of excellence, they will develop compassion for their fellow tennis players knowing the dedication and effort that it takes to perform at high levels. That’s why the top players have respect for their opponents, compassion for the ones who lose matches, and share the excitement of their wins with the ones who helped them get there.

Knowing the above qualities of top players, would you say you are among them? If not, would you be willing to work towards achieving that level?