Four Tennis Pros That Went All-In on a Different Career 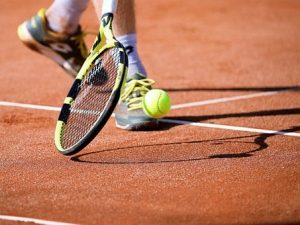 Tennis is one of the most physically demanding sports on the planet.
It requires stamina, focus, and, perhaps most importantly, the ability to make split-second decisions and commit to them completely.
Succumbing to fatigue or losing focus even for a moment can cost players the match, even when they go on for days at a time like the famous John Isner vs Nicolas Mahut match at Wimbledon.

It might not seem obvious, but these are many of the same traits needed to be a world-class poker player as well.
The absolute focus, mental stamina, and ability to make quick choices about whether to fold or call someone’s bluff are all ones that can be gained on the tennis court.
That is probably why many tennis players turn to games like poker when the season is done, trading the clay and grass for the felt and a chair.
Some take up the game when they’ve retired from competitive tennis while others fit it in between training sessions and tournaments.
We’ve discussed our ‘Top 10 Tips to Being a Better Tennis Coach’ before, so it might be worth including other games like poker into your players’ training.

Who has made the transition between sports most successfully? Here are a few of our favorite tennis pros who found a second home at the poker table.

This French tennis star has always had a competitive streak.
Before he became a tennis pro, David Benyamine was a competitive skier and soccer player in France.
He found his biggest success on the tennis court until, at the age of 25, he was forced to hang up his racket due to shoulder injuries.
However, he soon found another calling in poker.
His lifetime earnings in poker are nearly $8m and have included major tournament wins.
He even appeared at the 2021 World Series of Poker.
Benyamine has since become one of the most popular players in poker, drawing big crowds whenever he is in the running during a tournament.
A pretty good showing for what is his second career, really. This former number one tennis player is one of the most famous players to come out of Germany.
With six major titles to his name, it looks like he isn’t quite done on the competitive side of sports.
Now in his fifties, Becker can often be seen on the European Poker Tour, playing against some of the best the continent has to offer.
He certainly hasn’t left the world of tennis behind completely, regularly providing color commentary during major tournaments like Wimbledon where he continues to cause a stir at times, but it is clear that his retirement from one sport was largely a transition into another. This Finnish former tennis star certainly turns heads when he steps out onto the poker floor.
As a former model and professional athlete, he is one of the best-looking men to ever sit at the poker table.
But don’t underestimate him just because he is good-looking.
He has an astonishing $12m in poker winnings over his career, despite not competing in 2020 and 2021.
At this point, he has become far more famous as a poker player than he was as a tennis star or as a model. Though he started out as a youth tennis champion in his native Denmark, Gus Hansen has gone on to become one of the countries most successful poker players.
With over $11m in winnings and three World Poker Tour titles to his name, Hansen has certainly earned his nickname of “The Great Dane.”
But poker isn’t the only game that he is a regular competitor of.
He has won backgammon tournaments over the years as well.